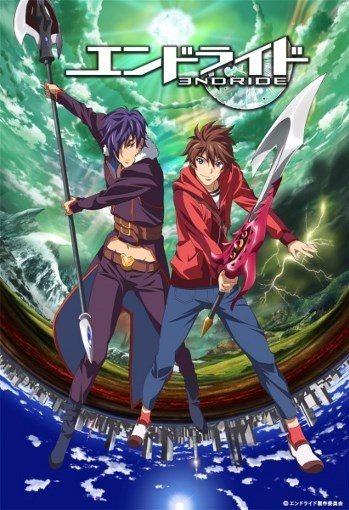 Endride is a 2016 portal fantasy anime by Brains Base, directed under Keiji Goto, written by Touko Machida and with character designs by Kazushi Hagiwara and Nobuhiro Watsuki.

Asanaga Shun is an Ordinary High-School Student with a particular passion for crystals. Upon touching a mysterious crystal in his often absent father's office, he finds himself Trapped in Another World called Endora, where he meets Prince Emilio Langheim, currently imprisoned for attempting to kill his adoptive father, King Delzaine. Shun quickly learns he is able to summon a weapon out of thin air (called a Warp Relic) and he and Emilio begin a testy partnership as they break out of the castle together. Despite their mutual dislike, they agree to work together to get Shun back to "the surface" by way of a remote site called Babylon in exchange for helping Emilio to kill Delzaine to avenge his real father, King Alzerm. Encounters with a childhood friend, an omnidisciplinary scientist (or three), and a revolutionary army soon make it clear that Emilio completely lacks a plan for what happens after, which is where the real work of changing the world and growing up begins.

Warning: The examples below include unmarked spoilers!