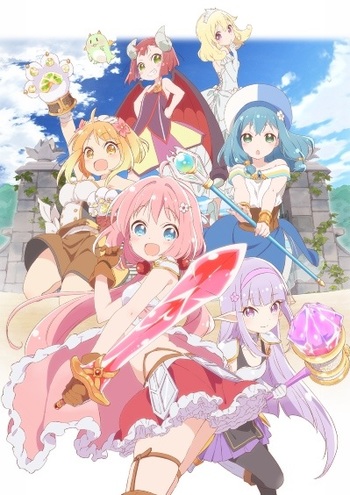 It's Still Too Soon for the End Roll~!
Advertisement:

Whenever a Demon Lord arises, a hero shall likewise arise to vanquish him. On Naral Island, a land of monsters and magic, that cycle has been repeating since time immemorial. Now, a young woman named Yulia "Yusha" Chardiet is the 999th hero, and together with her brave party—Elven priestess Ellenoar "Seira" Seiran, feral warrior Fai Fai, and card wizard Mather "Mei" Enderstto—they set foot into the Demon Lord's imposing fortress and cast the sacred spell that will seal him forever. And thus, the righteous heroines bring peace to the land....

From a Certain Point of View.

In reality, the girls are rambunctious, well-meaning idiots, and after Yulia flubs the sealing spell it accidentally transports the Demon Lord back in time and reverts to her human form: a small Moe girl. Naming herself "Mao", she decides to get her revenge by enrolling as an instructor at the Adventurer School that brought the girls together as a party. However, all her clever schemes to split the fellowship and get the girls expelled are stymied by Yulia's incredible luck stat, which makes sure every contrived scenario works out in her favor and brings the girls one step closer to becoming the warriors they're destined to be.

Endro~! (End Roll!) is an original Fantasy Slice of Life anime produced by Studio Gokumi with character designs by Namori (of YuruYuri fame). It began airing in the Winter 2019 season and is currently available for streaming on Funimation and Crunchyroll.

Not to be confused with End Roll, which is on the other side of the Sliding Scale of Idealism Versus Cynicism.