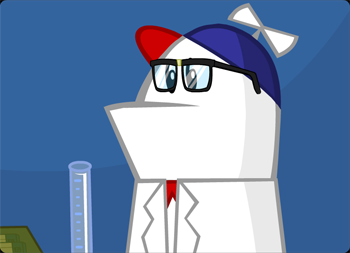 Homestar, who tries his hardest to subvert this trope.
Customer: I like these glasses. They make me look more smarter!
Customer's boyfriend: Yeah, well looks can be deceiving.
— Not Always Romantic
Advertisement:

In the media, smart characters have a tendency to wear glasses. The association with the Nerd archetype helps in modern works, although this trope is possibly older than that. Sometimes believed to be Truth in Television, as it is a common myth that since smarter people typically do more reading, they place more strain on their eyes and are more likely to develop myopia (nearsightedness). It should be noted that whilst reading in dim light can cause temporary eye-strain, there is no clinical evidence that this has any long-term effects. Some studies

have gone so far as to claim that myopia itself is linked with open-mindedness and intelligence. On the other hand, glasses are expensive, so people wearing them will not risk them in sports or fights (but some may use contact lenses instead). The trope's origins are more likely connected with the financial aspect, as both a high-quality education and seeing a doctor to get prescription lenses have always been expensive, so if a rich family can invest in one they'll probably invest in the other, too. Going even further back, glass of a high enough quality to be used as corrective lenses was difficult and expensive to make in many parts of the world, increasing the difficulty of obtaining glasses and monocles even further, and limiting it once again to the rich and academically inclined.

In anime, there is a commonly-used variant of this called Glasses-Kun: A Lancer who has black hair, is taller than The Protagonist, is always smarter than the main character, is relatively quiet, somewhat broody, and wears glasses.

In Real Life, there are lots of different types of people who wear glasses, but in fiction they are more rare. This is due to problems such as glare from the cameras in live-action media (cosplayers often pop the lenses out to avoid this in photos), difficulty reading facial expressions, etc., and is the reason why when such characters are present it seems more significant. As proven by the examples, it is also why this trope occurs more so in live action, animated programming, and other pictorial media and less so in literature; it's a visual cue to the audience that the character is intelligent, yet is used sparingly because of the aforementioned difficulties involved.

This trope is an inherent part of The Glasses Gotta Go and Beautiful All Along, and often Nerd. Supertrope to Nerd Glasses. The invoked form of this is Purely Aesthetic Glasses. Compare The Short Guy with Glasses.

Please do not list aversions, seeing as then it would be just a list of characters with glasses.