Film / No Regrets for Our Youth 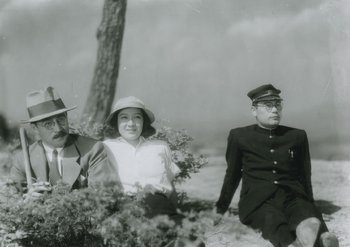 No Regrets for Our Youth is a 1946 Japanese film directed by Akira Kurosawa.

Setsuko Hara stars as Yukie, daughter of Mr. Yugihara, a left-wing professor at Kyoto University in 1933. Yugihara is fired from his job due to his leftist views, which touches off a general strike by university students all across Japan. Among the leaders of the strike at Kyoto University are Noge and Itokawa, two students who are also suitors for Yukie.

The student strike is crushed by the increasingly oppressive hand of Japanese fascism. Yugihara responds to the course of events by leaving activism behind and becoming an ordinary middle-class businessman. Noge on the other hand redoubles his efforts as an activist and member of the underground anti-war left. Yukie responds to this by marrying Noge.

No Regrets for Our Youth was Kurosawa's fourth feature film and the first to be made without wartime censorship from the government of Imperial Japan. It is an ode to the anti-war left in Japan that resisted the militaristic Japanese government. It might also be a sort of apology from Kurosawa himself, as he got his start in filmmaking by making propaganda films during the war. Star Setsuko Hara is best remembered for her role in the Yasujiro Ozu masterpiece Tokyo Story.

One of only two Kurosawa films with a female protagonist, the other being his even earlier picture The Most Beautiful.