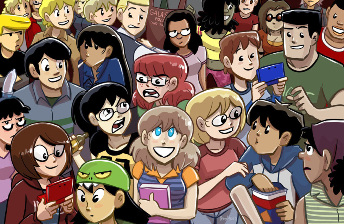 is a Slice of Life Webcomic by David Willis, set at Indiana University and revolving around the freshman class of whatever year this is. Though it has multiple characters, its primary focus is on Joyce Brown, a naive fundamentalist Christian with a friendly demeanor and a rigid but upbeat outlook on life, and her unlikely best friend Dorothy Keener, an ambitious atheist and pre-law student. Also along for the ride are Joyce's roommate, a snarky, nigh-misanthropic sophomore named Sarah Clinton, and their next-door neighbors, alcoholic and wannabe-Alpha Bitch Jennifer "Billie" Billingsworth and Book Dumb, badass-incarnate Sal Walkerton. And then there's local vigilante Amazi-Girl, secretly fellow freshman Amber O'Malley, who uses the alter-ego to compartmentalize her anger issues. All these people have assorted friends and relations, any of whom are capable of taking center-stage at any time—it's probably a good idea to take a look at the character sheet to get a sense of the sheer scope of the work.

The comic is an Ultimate Universe counterpart to Willis' other comics, playing fast and loose with the personal histories of the characters, stripping out the science-fiction elements altogether, and leading to characters co-existing and forming relationships when they'd barely met in the other 'verse (or vice versa.) In a sense it could be said to be a reboot of Roomies! specifically, given the college focus, but with characters from everything up through Shortpacked! included.