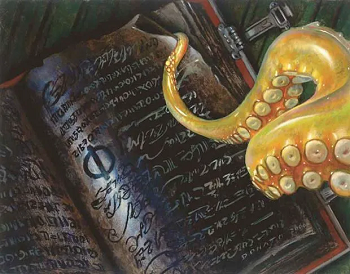 WARNING: Reading may cause a slight headache.
"Ash nazg durbatulûk, ash nazg gimbatul,
Ash nazg thrakatulûk agh burzum-ishi krimpatul"note "One ring to rule them all, one ring to find them, one ring to bring them all, and in the darkness bind them."
— The Lord of the Rings: Inscription on the One Ring, with inflection
Advertisement:

The language of Mordor, spoken only by The One Whose Name Must Never Be Uttered and his Religion of Evil and various dark cults. An indecipherable language that is cruel to the ears, full of hard consonants, guttural sounds, and always spoken loudly and harshly. Every word sounds like a blasphemy against All That Is Good, and the people speaking it often are as evil as they sound. If there is magic in the setting, expect speaking this language to be necessary to use Black Magic. In some cases, it's so alien and gravelly that it seems that a normal human throat should be incapable of speaking it… and sometimes, they can't speak it, only those with the Voice of the Legion can. In many cases, merely speaking the words is sufficient to twist reality or make unspeakable horrors appear.

This is the Black Speech, the default mode of communication for inhuman villains, and Sound-Coded for Your Convenience. Where the elves and humans will speak in a pleasing, song-like language, and dwarves may (read: always) have a charming Scottish burr or Welsh brogue note in Tolkien's world, this is averted, as what is known of Dwarvish holds more similarity to Hebrew, but in the film, it's in full force with Gimli, the Evil Minions using Black Speech can shatter glass and eardrums and sanity with a simple "pass the salt".

On a more meta level, this is a direct emotional appeal to the viewer, invoking the "otherness" felt when hearing a foreign language crossed with the Scare Chord to make the good guys seem like downright saints compared to the bad guys. The effect is sometimes doubled by having Aliens Natives Speaking English.

Once upon a time, Nazis speaking German were considered to be using Black Speech (likely, the actors were hamming it up to sound scarier). Nowadays, German is just another language alongside French (indeed, if anything, it's a bit camp

Using real but obscure languages as models for a fictional Black Speech because they sound very peculiar to native speakers of your language can get you into trouble. This seems to happen to Native American languages quite a bit.

Although the villains may speak among themselves in black speech, their dialogue may provide important details for the audience to understand the plot. In this case, the dialogue may have normal subtitles.

Works using this trope will often discuss The Power of Language. Not to be confused with Ebonics

(although it literally means "black speech"), or with black Color-Coded Speech or Rainbow Text.