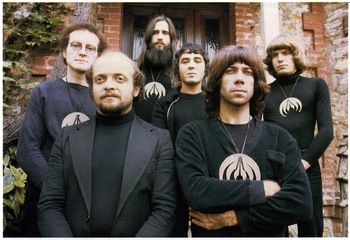 Magma is a Progressive Rock band from Paris who are the Trope Makers for the subgenre of Zeuhl. Classically trained drummer Christian Vander formed the band in 1969 after he had a "vision of humanity's spiritual and ecological future" that severely disturbed him. The band has made a series of science-fiction Concept Albums that tell the story of an alien world called Kobaïa. The band's first album tells the story of people fleeing a doomed Earth to settle on Kobaïa, while later albums tell of conflict between the Kobaïans and other Earth refugees.

One fairly unique trait of Magma's music is use of a Conlang (Kobaïan, naturally) for most of their lyrics, derived in part from Slavonic and Germanic languages and in part from avant-garde jazz singer Leon Thomas' "scat-yodeling" vocal style (most famously heard on "The Creator Has a Master Plan" from Pharoah Sanders' seminal 1969 album Karma). Vander and the other band members invented the language because they felt French was not expressive enough for the story they wanted to tell, and it also enabled their music to have a more alien sound. Another benefit was that having the lyrics in Conlang prevented people from over-scrutinising the lyrics (although unofficial Kobaïan-French and Kobaïan-English lexicons have been constructed, and Vander eventually revealed the meanings of some words).

Musically, Magma have few obvious influences, but their biggest influence is John Coltrane, with Carl Orff, Otis Redding, Igor Stravinsky, and Richard Wagner being other notable influences (alongside the aforementioned Thomas and Sanders, the latter himself a Coltrane alumnus). African-American spiritual music has also been a notable inspiration on the band, and they have also cited Motown as an influence. Magma's compositions are complex, frequently running thirty minutes or more, with copious time signature and key signature changes. They also feature complex choral arrangements with both male and female vocals, and Soprano and Gravel is not an unheard of trope.

Amongst the band's big-name fans are John Lydon, Jello Biafra, Kristoffer Rygg, Steven Wilson, Mikael Åkerfeldt, Travis Ryan, Deathspell Omega, and Alejandro Jodorowsky (who wanted Magma and Pink Floyd to score his unfilmed adaptation of Dune). World champion snooker player Steve Davis has been a passionate follower of the band since his youth and used some of his winnings to promote a series of concerts by the band; magician Penn Jillette (of Penn & Teller) also numbers among the band's fans. We also mustn't forget Japanese drummer Tatsuya Yoshida, whose project Koenjihyakkei is an unusually faithful Spiritual Successor.

The band also has a huge number of offshoots. Former and current members such as Jannick Top and Christian Vander have gone onto successful solo careers, while spinoff bands include Offering, Weidorje, and Zao.

More information, as usual, can be found on That Other Wiki here