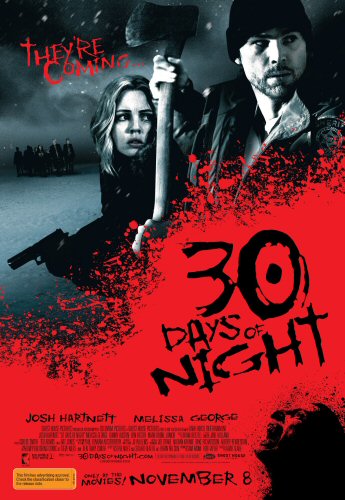 "There is no escape. No hope. Only hunger, and pain."
"Barrow, Alaska - Northernmost town in the U.S.
Isolated in 80 miles of roadless wilderness.
Cut off every winter for 30 days of night."
Advertisement:

The film is set in Utqiagviknote Barrow at the time of filming and named as such in-universe, Alaska, the northernmost town in the USA and as such has one month with no sunlight. During this period, most of the townsfolk leave for sunnier pastures.

But this year, things are different. First, a bunch of mobile phones turn up burned. Then all the sled dogs in town get brutally slaughtered. Then someone smashes up the only helicopter. When a tall, dark stranger (Foster) walks into the diner and starts drawing attention to himself, Sheriff Eben Oleson (Hartnett) arrests him. But when the stranger starts talking about how "they" are coming, Oleson starts getting jumpy. Finding a man's head on a stake doesn't help calm him down.

"They" turn out to be a horde of vampires itching for a taste of fresh blood, and they plan to take every advantage of a month without sunrise. The sheriff and his estranged wife (George) gather up a group of survivors and plan to survive the thirty days of night.

Also it's an adaptation of the first book from a graphic novel series of the same name, written by Steve Niles and illustrated by Ben Templesmith.

A direct-to-video sequel was released in 2010 call Dark Days likewise based on the sequel comic book of the same name. In it Stella, one of the survivors of Barrow, tries to prove the existence of vampires and joins up with a group of people who have also had run-ins with vampires, enlisting her help in trying to take down a vampire queen.

There's also two supplementary miniseris: Blood Trails, which acts as a prequel to the first movie, and Dust To Dust which takes place afterward.

Scene from "30 Days of Night". The surviving protagonists hole up in a grocery store to hide out from the vampire horde attacking the town. However they find they're not alone when the youngest of the horde find them.

Scene from "30 Days of Night". The surviving protagonists hole up in a grocery store to hide out from the vampire horde attacking the town. However they find they're not alone when the youngest of the horde find them.