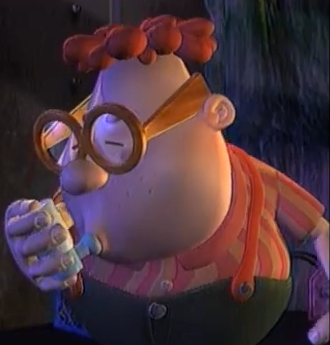 "I have asthma! Back off!"
— Leonard Hofstadter, The Big Bang Theory
Advertisement:

In fiction, having to use an inhaler at all immediately alerts the audience that this person is a nerd. It is rare or almost impossible to see anybody considered to be cool using one.

This is usually not Truth in Television, because whether or not you need to use an inhaler has little to no bearing on your personality. However, if you have asthma or some other kind of breathing problem, it might prevent you from participating in strenuous sports, so you'll go into academics instead, fitting with the nerdy stereotype. This probably accounts for the association. However, Asthma has degrees of severity and in real life, even some athletes like David Beckham have had asthma. In fact, athletes with minor asthma (which is common in real-world schools) often need inhalers when people with the same condition wouldn't normally because of the increased lung use.

Before inhalers, some people with weak health/lung problems (notably Robert Louis Stevenson and H. G. Wells) turned bookworm to entertain themselves when confined to bed and ended up with literary careers. Improved technology (visual media and inhalers) now gives us this trope as visual shorthand.

A Sickly Neurotic Geek is also likely to use an inhaler. Often accompanied by Nerdy Nasalness. Compare Geek Physiques.