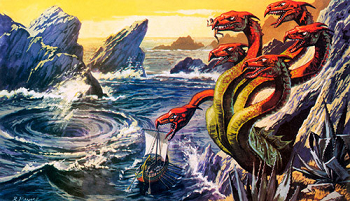 Pick your poison — either face one of them or face the other.
"You consider me the young apprentice
Caught between the Scylla and Charybdis
Hypnotized by you if I should linger
Staring at the ring around your finger"
— The Police, "Wrapped Around Your Finger"
Advertisement:

A situation in which a character must attempt to balance or choose between two (sometimes more) mutually exclusive obligations, desires, ideals, etc.; failure on either front would be disastrous, but it's equally impossible to please everyone. When the trope is played for laughs, Hilarity Ensues as the character attempts to mollify everyone while the scheme inevitably unravels around him; it's typically subverted when the consequences of failure are revealed to be not so dire as originally believed. Often seen on chase-style cartoons where, by avoiding one foe or obstacle to a good meal, the Butt-Monkey unwittingly runs into another problem (e.g. jumping into water to avoid a swarm of angry bees, only to fail to see the DANGER: PIRANHA sign behind the bushes until too late).

The Two-Timer Date, wherein one person must shuttle between two simultaneous appointments, can be a specific example. Note, however, that a Scylla and Charybdis situation may not necessarily be caused by the character's own scheming, oversight or negligence. The outstanding feature of this trope is that the central character must try to appease everyone at once, but cannot.

Wake Up, Go to School, Save the World generally results from this, as someone trying to balance a fantastic life with a mundane one realizes the intense pressure from either side.

The trope name refers to the two sea monsters of Greek Mythology which trapped sailors between them, making it Older Than Feudalism. Scylla was a Shape Shifter Mashup that ate sailors, and Charybdis a whirlpool that swallowed ships. It has since been rationalized that the "monsters" were a real and dangerous shoal and a real but pretty weak whirlpool in the Strait of Messina, between the Italian mainland and Sicily (both long known to the Greeks and colonized by them by the 8th century B.C.—incidentally around the same time modern historians believe Homer lived).

Often dumbed down to "a rock and a hard place". (In fact, the phrase probably had its origins in the aforementioned myth.)

Compare Morton's Fork, where a character is presented a Sadistic Choice where every outcome is negative, and doesn't even have the option of trying to stay on the fence.