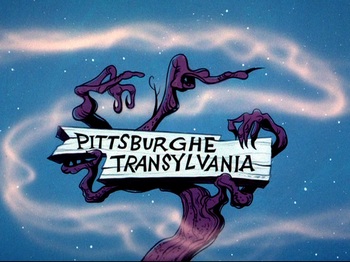 Bugs really took a Wrong Turn at Albuquerque this time.
Transylvania 6-5000 is a 1963 Merrie Melodies cartoon directed by Chuck Jones and Maurice Noble. Bugs Bunny is burrowing through the ground, aiming to get to Pittsburgh, Pennsylvania. Instead, he ends up smashing headfirst into a gnarled tree, on which is displayed a location sign: "Pittsburghe, Transylvania."
Advertisement:

As he emerges from his hole, Bugs notices a two-headed vulture (Agatha and Emily) and asks them for directions. Since they seem more concerned with making a meal out of him, he goes over to the old castle — which he mistakes for a hotel — in the distance.

At the castle, Bugs meets a vampire who introduces himself as Count Bloodcount. Though Bugs is only looking for a telephone, Bloodcount insists that he rest up at the castle before making his call. While he is still as much a Karmic Trickster as ever, Bugs is portrayed as unaware of the reality of his current surroundings and easily taken advantage of at the start.

This cartoon is notable for being the final classic Bugs Bunny cartoon directed by Chuck Jones, and for arguably being the final great Looney Tunes cartoon of the classic era (none after it surpass an 8.0 on iMDB). Later edited (mostly intact) into 1988's Daffy Duck's Quackbusters, while excerpts were also edited into 1977's Bugs Bunny's Howl-oween Special (with Count Bloodcount now portrayed as Witch Hazel after drinking Dr. Jekyll's Hyde potion)

Should not be confused with the 1985 film of the same title.