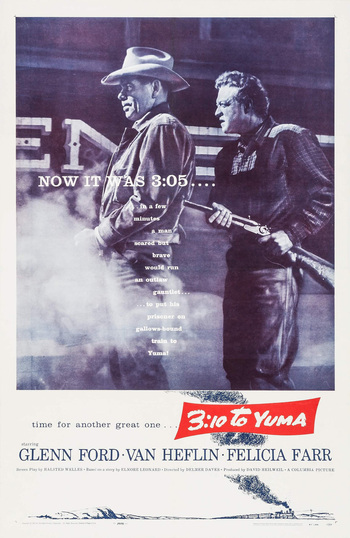 Dan Evans (Heflin) is a cattle rancher in the Arizona Territory of The Wild West sometime in the latter 19th century. His ranch is not doing very well, mostly due to a three-year drought that is slowly killing off his cattle. There are tensions at home, as his wife Alice (Leora Dana), who came from money, is growing weary of their hardscrabble life.

While driving his remaining cattle back to his ranch along with his sons, Evans encounters a gang of bandits led by the notorious outlaw Ben Wade (Ford) robbing a stagecoach. Wade lets Evans and his boys go, but kills the stagecoach driver and absconds with the gold it was transporting. The gang rides to Bisbee, but Wade is captured when he lingers in the town to enjoy a roll in the hay with barmaid Emmy (Farr). A $200 reward is offered to whoever will escort Wade onto the eponymous train to Yuma, where he will be held for trial, and Evans volunteers — but Wade's men are on their way back to free their leader.

Based on the short story "Three-Ten to Yuma" by Elmore Leonard. In 2007 a remake with the same title came out, starring Russell Crowe and Christian Bale in the roles originated by Ford and Heflin.