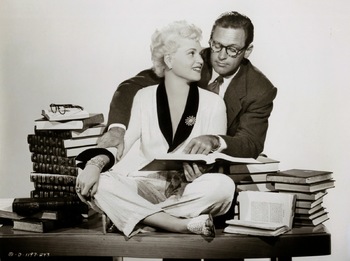 "A world full of ignorant people is too dangerous to live in."
— Paul Verral
Advertisement:

A 1946 play by Garson Kanin, Born Yesterday is best known for its 1950 film version directed by George Cukor. The play and film starred Judy Holliday, who won an Oscar as Best Actress for the film version. Her big screen co-stars were Broderick Crawford and William Holden. Another film version was made in 1993, starring Melanie Griffith, John Goodman and Don Johnson; it was not well-received.

The story concerns Harry Brock, an unscrupulous tycoon who wants even more money. He decides to buy the favors of a few congressmen to help further his schemes. Unfortunately, his girlfriend Billie is completely lacking in social skills; to remedy this, he hires journalist Paul Verral to give her an education. Unfortunately for him, he doesn't count on her realizing just what kind of man he is.