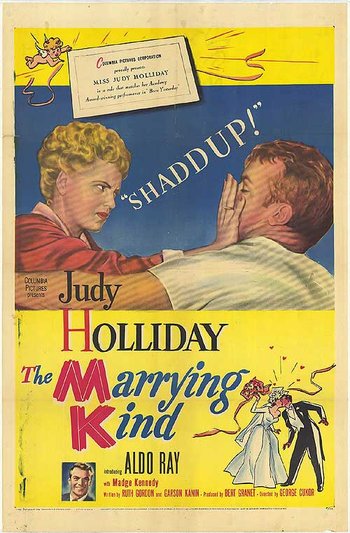 You know, counselor, there's an old saying, there are three sides to every story: yours, his, and the truth.
Advertisement:

A Romantic Comedy with a bit of tragedy, directed by George Cukor, starring Judy Holliday and Aldo Ray.

A divorce is taking place between mail clerk Chet (Ray) and Florence Keefer (Holliday). Procedings are scheduled for the next day when Judge Anne Carroll (Madge Kennedy) decides to sit down with the couple to understand why they’re filing for divorce.

Both parties narrative their married life, and come up with different reasons why their marriage no longer works.

After the success of Born Yesterday, Holliday’s writing team, Ruth Gordon and Garson Kanin, wrote The Marrying Kind (1952) for her with the approval of studio head, Harry Cohn.

Tropes found in The Marrying Kind: