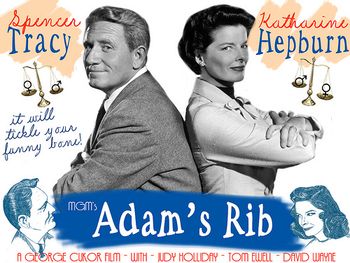 Adam and Amanda Bonner are wealthy married lawyers living in New York, he working for the district attorney's office and she working as a defense attorney. Adam gets assigned as prosecutor in the attempted-murder case of Doris Attinger (Judy Holliday), a housewife who followed her unfaithful husband to his mistress's apartment and shot him in the shoulder. Amanda, wishing to prove a point about feminism and the Double Standard, gets Doris to hire her as defense attorney, setting up the Bonners as opponents in court. This does great harm to their marriage.

One of nine films co-starring Tracy and Hepburn.