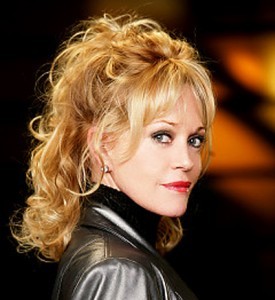 Melanie Richards Griffith (born August 9, 1957 in New York City, New York) is a prolific actor who has spent almost her entire life in front of movie and television cameras alike, experiencing a critical peak in the 1980s and 1990s.

She is the daughter of Tippi Hedren, the mother of Dakota Johnson, and was married at various times to Don Johnson, Steven Bauer, and Antonio Banderas.