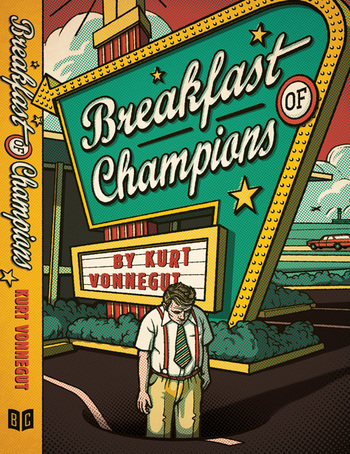 This is a tale of a meeting of two lonesome, skinny, fairly old white men on a planet which was dying fast.
Listen:
Advertisement:

Breakfast of Champions, or, Goodbye, Blue Monday! is Kurt Vonnegut's seventh novel, and one of his stranger dips into metafiction. First published in 1973.

Dwayne Hoover is the fabulously well-to-do owner of a Pontiac dealership. He's made his money in real estate. He's handsome and has oodles of charm. He's also slowly been going insane since his wife committed suicide.

Kilgore Trout is the reclusive author of various obscure science fiction stories for different, largely pornographic publishers, who paid him doodly-squat. He has just received an invitation to speak at an arts festival down the road from Dwayne Hoover's Pontiac dealership, and he wants to appear as the ultimate representative of failure.

Kilgore Trout's fiction will inspire Dwayne Hoover to completely snap and go on a rampage.

Made into a film by Alan Rudolph (Breakfast of Champions

) in 1999, with Bruce Willis as Dwayne Hoover and Albert Finney as Kilgore Trout. Vonnegut himself called the film "painful to watch".

The name comes from the slogan for Wheaties breakfast cereal (see Our Lawyers Advised This Trope below).