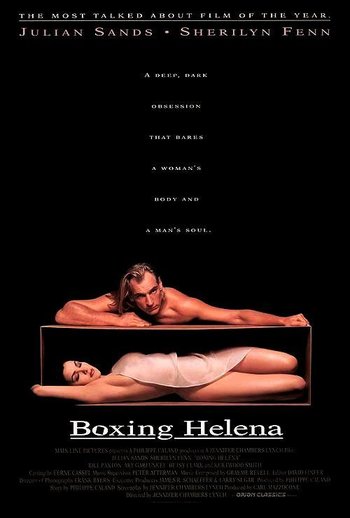 Boxing Helena is a 1993 film directed by Jennifer Chambers Lynch (the daughter of David Lynch) and starring Julian Sands and Sherilyn Fenn.

Surgeon Nick Cavanaugh is obsessed with a beautiful woman named Helena. He tries to convince her that they need each other, but she rejects his advances. Then one day, Helena gets run over by a car, forcing Nick to amputate her legs to save her life. Afterwards he holds her captive at his mansion, eventually amputating her arms to foil her persistent escape attempts. Things go completely bizarre once the plot unfolds.

A notorious flop and a Creator Killer/Star-Derailing Role for both Lynch and Fenn respectively - Lynch waited fifteen years for her next directing gig, Surveillance, and Fenn's movie career sputtered to a halt not long after. It also poisoned Kim Basinger's career, and she didn't even appear in the movie—she was cast as Helena but dropped out of the film after seeing what she was going to be in, and distributor Orion Classics responded by suing her into bankruptcy.