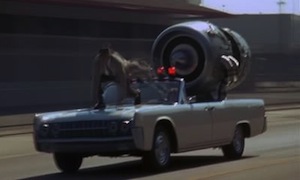 This car's got only two speeds. 'Fast' and 'Whoo! What was that?'
Advertisement:

One way to show off a vehicle, such as muscle cars, is by having some really big engines on it. May be used for Compensating for Something.

While there are actual instances of vehicles that for some reason have to use monstrous engines — modern high speed trains, for example, need at least 15,000 hp to move hundreds of tons of steel at 350 km/h — in practice it usually won't work for other things than showing off: even 3000+ hp World War II aircraft engines are not that big, and they still need a transmission strong enough to cope with their torque. Heavy truck and tracked vehicle gearboxes are immensely heavy, the same weight as small cars themselves; supercars and racing vehicles, which can't afford the luxury of just making the transmission bigger, must resort to exotic alloys and laser-cut gears with nanometric precision that can cost by themselves as much as a mass-produced luxury car.

See also Unnecessarily Large Vessel. Does not refer to a very large locomotive. Or fire truck.

Do not confuse with Eternal Engine.