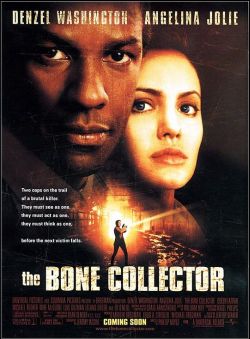 A thriller from 1999, directed by Phillip Noyce and based on the novel of the same name by Jeffrey Deaver (the first book in his Lincoln Rhyme series).

The main characters are quadriplegic forensics expert Lincoln Rhyme (Denzel Washington) and NYPD patrol cop Amelia Donaghy (Angelina Jolie), who team up to solve a string of murder cases in which the killer always removes a shard of bone from the victims.

The first victims are a couple named Alan and Lindsay Rubin who are kidnapped by the killer after taking a taxi home. Alan's body is found in a civil-war era gravel bed. A few pieces of evidence are recovered at the scene by the resourceful Donaghy, despite not having the training or equipment for proper forensic work; when they are presented to Rhyme for analysis he's so impressed that he insists she work the case with him.