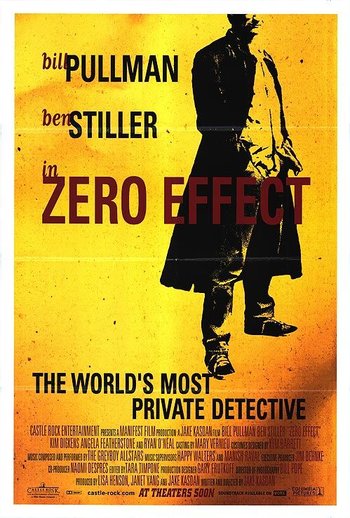 Daryl Zero (Pullman), a brilliant but reclusive private eye, traditionally works from afar with assistant Steve Arlo (Stiller) as his representative in the field. Socially awkward and inept but extraordinarily confident in his deductive abilities, Zero keeps himself locked in his apartment where he composes awful songs on his guitar and subsists on a diet of tuna, Tab, pretzels, Campbell's soup, and amphetamines. Zero and Arlo are retained by Corrupt Corporate Executive Gregory Stark (Ryan O'Neal) to investigate who is blackmailing him and stole his keys. Immediately, Zero is thrown into a quirky world of seduction, intrigue, comedy and double-crosses.

Pretty obviously based on the Sherlock Holmes story "A Scandal in Bohemia", down to specific traits that Zero and Holmes share and the eventual resolution of the plot — almost everything in the film has a direct Holmes parallel — although where it doesn't swipe from Holmes, it's doing a Raymond Chandler riff.

The character of Daryl Zero was brought back for a One-Episode Wonder television adaptation in 2002, though it was not picked up by the network.