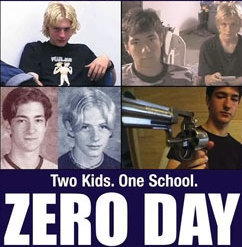 Zero Day is a 2003 film directed by Ben Coccio, built as a mockumentary of sorts archiving hours of video diaries recorded in 2000 and 2001 by two high schoolers — Andre Kriegman and Calvin Gabriel — ahead of a Columbine-esque massacre they plan to enact (referred to by both as the namesake "Zero Day").

The recordings document the preparation and rather vague explanations given by the two, as well as broader aspects of their lives through seemingly random family scenes and events.