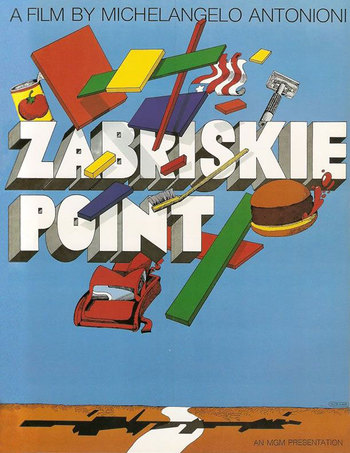 The film is set primarily in Southern California, dealing with two parallel plots that eventually intersects in the course of the story. In Los Angeles, Mark (Mark Frechette) is a student and budding campus radical bored with endless student discussions about activism and revolutionary agitation and seeks to commit some form of action or another. The end result leads to a confrontation with the police where Mark might or might not have killed a cop, but as a result of this action, he becomes a fugitive and goes on the lam, choosing to abscond on a small aeroplane. The second plot deals with Daria (Daria Halprin) a young woman who works for a real estate firm and is driving through the desert towards Phoenix, much to the perplexity of her boss Lee Allen (Rod Taylor) who is also her lover. Allen is currently pitching a vast real estate expansion across California and is anxious for Daria's company. Eventually Mark and Daria come across each other in their travel across the desert, starting a journey of mutual self-discovery or self-delusion, depending on the pot they are smoking.

The film was inspired by a true-life incident of a young man stealing an aircraft for a joyride and was inspired by other aspects of the sixties' counterculture. It is notable for its extensive location shooting in the Downtown Los Angeles area, prominently featuring the Richfield Tower art-deco building before its destruction, in Death Valley (albeit not the titular Zabriskie Point) and in Carefree Arizona. Its cast of non-actors includes actual hippies and activists including Kathleen Cleaver of the Black Panthers. In addition to the score by Pink Floyd, the film's soundtrack features a number of songs from The Grateful Dead, The Youngbloods, Kaleidoscope, The Rolling Stones (Band) and John Fahey, while Roy Orbison sang the end-credits song "So Young".