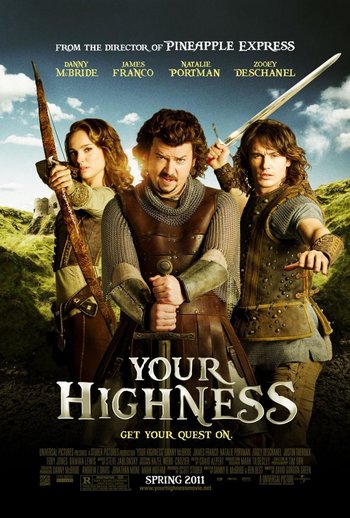 "One of the heroes even wears the penis of a minotaur on a string around his neck. I hate it when that happens."
— Roger Ebert's review

Your Highness is a 2011 adventure comedy fantasy film directed by David Gordon Green of Pineapple Express fame that could best be described as a tongue-in-cheek take on the High Fantasy genre.

The film centers on Prince Fabious (James Franco) and Prince Thadeous (Danny McBride), who are of the bold/valiant and slovenly/slacker variety, respectively. Fabious' bride to be, Belladonna (Zooey Deschanel), is spirited away by an evil wizard, and her fate rests in the hands of the two princes, who embark on the journey of journeys to rescue her. Joining their quest is Isabel (Natalie Portman), a warrior skilled in the art of deadly combat with her own personal agenda for stopping the wizard. Together, the trio faces a variety of deadly and at times hilarious dangers, from witches and knights to minotaurs and hydras.