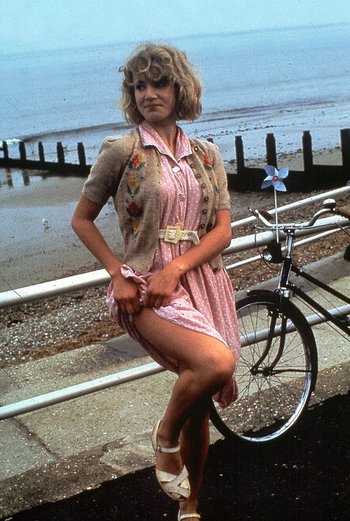 UP YOUR BUM!
"Wish You Were Here is a comedy with an angry undertone, a story of a free-spirited girl who holds a grudge against a time when such girls were a threat to society, to the interlocking forces of sexism and convention that conspired to break their spirits."
— Roger Ebert
Advertisement:

Wish You Were Here is a 1987 dramedy film directed by David Leland. In 1951 England, Lynda Mansell is fifteen years old and is bored with living in a small British resort town with her single, alcoholic father who's incapable or unwilling to show Lynda any affection and her goody-goody little sister Margaret. Nobody in town understands Lynda's outspoken, brash style and attitude which are ahead of the time. Lynda searches for love in various places, resulting in serious consequences.

Not to be confused with the Pink Floyd album.

Alternative Title(s): Wish You Were Here