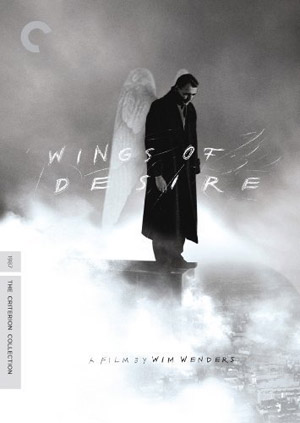 The film depicts two angels, Damiel and Cassiel, wandering in Cold War era Berlin and listening to the thoughts of humans. Among those humans are an old man looking for the now-destroyed Potsdamer Platz and recalling the good times he used to have there; Peter Falk As Himself; and Marion, a lonely French trapezist.

The angels don't directly intervene in human existence but sometimes give comfort to humans who need it, like a woman in labor, or a suicidal man on a tram, or a motorcyclist who is dying in the street after he was struck by a car. However, Damiel yearns to be human himself and to experience life as a mortal does. Eventually he falls in love with Marion the trapeze artist, and has to make a difficult choice.

A sequel, Faraway So Close, was made in 1993. The first film received a very loose American remake, City of Angels, in 1998.

Bruno Ganz, who plays Damiel, would explore the other extreme of the good-to-evil spectrum a quarter-century later when he played Adolf Hitler in Downfall. Curt Bois, who plays the elderly storyteller, was the pickpocket ("vultures, vultures everywhere") in Casablanca.