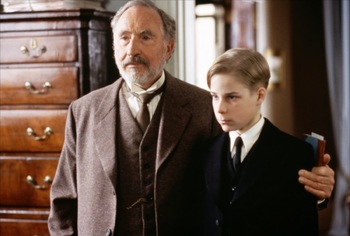 1999 film adaptation of the play by Terence Rattigan, written for the screen and directed by David Mamet. A young boy, Arthur Winslow, is expelled from the Royal Naval College for theft. When he maintains his innocence, his father (Sir Nigel Hawthorne) does whatever it takes to clear his family name. Caught up in the battle are Mrs. Winslow (Gemma Jones) and the Winslow's feminist daughter Catherine (Rebecca Pidgeon). The Winslows turn to the expensive, conservative, and controversial attorney Sir Robert Morton (Jeremy Northam), and they proceed to take England by storm with the slogan, "Let Right be Done."