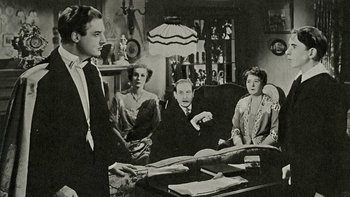 , directed by Anthony Asquith and adapted by Terence Rattigan from his own 1946 play.

Ronnie Winslow (Neil North) has been kicked out of naval school for the theft of a postal order, but Ronnie vehemently denies stealing it. His father, Arthur (Cedric Hardwicke), and his suffragete sister, Catherine (Margaret Leighton), will move heaven and earth to prove Ronnie's innocence. They soon receive the help of Sir Robert Morton (Robert Donat), the talented barrister who, although eccentric, proves to truly care about this serious miscarriage of "right".