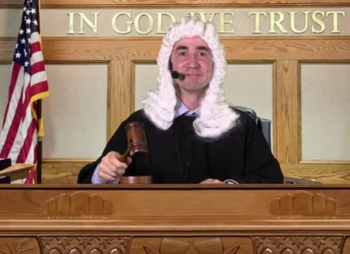 If there's a guy in the courtroom with a huge, powdered-white wig, chances are he's the judge. Thanks to eighteenth-century fashion sentiments in England, the judicial wig has become a symbol of the power behind the bench. This convention extends to media depictions of the judiciary as well - even if there's no other information like dialogue or setting to indicate it, you can figure out the job of the guy with the long white wig.

This may seem like People Sit on Chairs to some Tropers, particularly those who inhabit Britain or some countries in The Commonwealth; notably, America is neither, and this is more often than not an Averted Trope there. The Judicial Wig owes its existence to fashion trends in Europe in the eighteenth century—long, powdered wigs were in vogue. For those places where court dress has retained these elements of style, force of habit and tradition kept them in place even after people in general stopped wearing them. In particularly modern settings, this may serve as an indicator that the presiding judge is too much of a Cloud Cuckoolander or, ironically enough, a Rules Lawyer to render a decision effectively.

The Other Wiki has more information.

Compare Stern Old Judge, Scales of Justice, another common symbol of law, and Black Cap of Death, with which the wig may be complemented.

All rise! The honorable works that provide examples of this trope include: