Series / Figure It Out 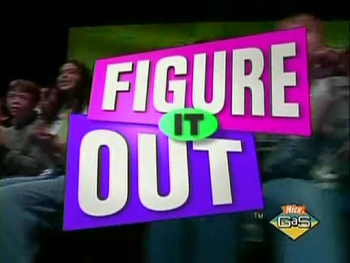 2012-2013 version
A Nickelodeon Game Show that aired in the late 1990s, that was hosted by former Olympic swimmer Summer Sanders, where four panelists guessed the contestant's secret talent, ranging from collecting items to performing cool and unique stunts.
Advertisement:

The panel was given three one-minute rounds to guess that talent in the form of asking yes-or-no questions; hints were given through props, charades, a giant game board called "Billy the Answer Head" (which listed the player's talent, with words revealed if the panel said them), and a "clue monitor" that would be read off just before Rounds 2 and 3. The contestant received a nice prize for each round the panel was stumped, and a grand prize if they stumped through Round 3.

But unlike I've Got a Secret, What's My Line?, and most other panel shows, Figure added the Secret Slime Action, in which any panelists that performed it would be Covered in Gunge in true Nickelodeon fashion... although very rarely, there was no Secret Slime Action (as in 'rarely', if they weren't teased by Summer to perform it).

The show went for four seasons from 1997 through 1999, where the third season went Family Style in Fall 1998, with families as the contestants, and for the final season, when the show theme was altered again to Wild Style in Fall 1999, with the abilities being limited to animal themes. Reruns then started airing on Nick GAS until its disestablishment in 2007.

A revival of the show premiered in June 2012, now hosted by Jeff Sutphen. It counted with 2 seasons, following the original formula, where the panelists are guests and stars of some of their current Nick shows (like iCarly and Victorious) in which they tried to figure the talent or special skill of the contestant. However, two major changes done were the replacement of "Billy the Answer Head" with "The IT Board", which serves the same purpose (and makes the show's title quite literal in the present), and the added potential for the contestant to get slimed (see Covered in Gunge below), too.