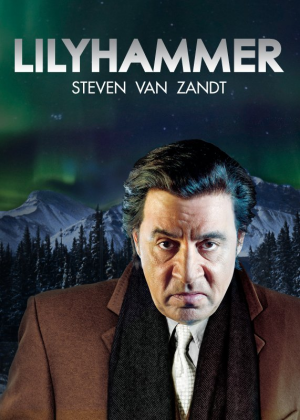 Lilyhammer is a Norwegian-American co-production that describes exactly what happens when The Mafia meets Norse by Norsewest. After the death of his boss, New York mobster Frank Tagliano is betrayed by his new Capo and nearly killed (unfortunately, his dog is not so lucky). Tired of the Mafia lifestyle, Frank turns state's evidence and enters Witness Protection. Deeming New York to be unsafe, Frank demands that the FBI send him to Lillehammer, whose beautiful surroundings he remembers from watching the 1994 Winter Olympics on TV.
Advertisement:

Hilarity Ensues as Frank takes the identity of "Giovanni Henriksen" and travels to Norway. Things quickly turn out differently than poor Frank intended: the system treats him as an immigrant on par with any Middle Easterner or African refugee, he has weeks of courses to pass before he can gain citizenship, and the Feds "forgot" to set him up with a valid driver's license. And on top on that, he ends up living next door to the local chief of police. Faced with all this, Frank quickly gets up to his old tricks to bend the sleepy, freezing town to his will...

Broadcast by NRK (the Norwegian equivalent of The BBC) in Norway and available on Netflix in the United States, notably becoming the first-ever series exclusive to the platform, Lilyhammer is unabashedly and unashamedly The Sopranos in NORWAY!. Sopranos alumn Steven Van Zandt more or less plays an expy of Silvio Dante, and much of the comedy comes from watching him tackle the totally unfamiliar landscape of rural Norway. The series has turned out to be a huge success in Norway, while garnering ... slightly less attention in the US. The second season saw the inclusion of more (famous) American actors, as well as a few British ones. The third season was released in November 2014.