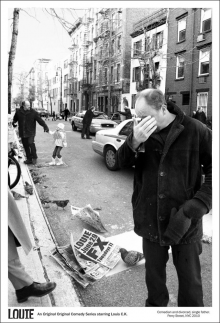 Louie is a semi-autobiographic comedy show written, directed, created, edited and produced by Louis C.K., and aired on FX. It's the type of show that begs the question of when a show stops being a sitcom, and starts being a series of unconnected absurdist short films centered around one character, running on a Curb Your Enthusiasm-reminiscent format of being set to a mostly dry soundtrack (or none at all), not using a Laugh Track, and deriving most of its humor from excruciatingly awkward or painful situations.

The show stars C.K. as a fictionalized version of himself named Louie and typically follows him performing stand-up (similarly to Seinfeld), but also focuses on his life as a newly divorced father raising two daughters in New York City. Some of the material is either somewhat surreal or similar to his YouTube material, but the show gives the overall impression of being fairly true to life.

For the first three seasons, there weren't really any season arcs beyond the occasional link or two, with exceptions including the trilogy of "Late Show" episodes, and the show's occasional delves into more serious topics (ex: the episode "God") based on significant experiences in C.K.'s life that made him who he is. The fourth season, however, was much more dramatic and featured increased continuity and three multi-episode storylines including the six-part "Elevator" arc. C.K. mentioned that the show's fifth season would return to having more humorous episodes.

Following the third season, the show went on an extended hiatus so C.K. could recharge his creative batteries, finally returning for its fourth season in May 2014. He then announced that he would take another long hiatus

between the fifth and sixth seasons to co-produce a series for FX called Better Things starring his friend (and Louie co-star) actress Pamela Aldon.

Amid this hiatus, FX ended their business partnership with C.K.'s production company, Pig Newton, in November 2017 following his admission that a series of sexual misconduct allegations made towards him were true, ceasing production on Louie.