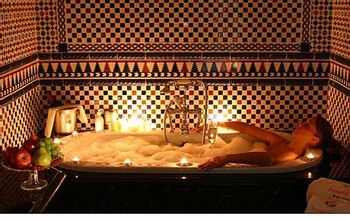 "It's not the bath I enjoy, it's the wet, naked lady."
— Chandler, Friends
Advertisement:

Sometimes, a bath is just a bath. In others, it's a way to set a mood.

You see it a lot in the movies and on TV: someone's had a hard day, and needs to to relax, to make the cares and stresses of the workaday world melt away. She draws a bath — it's often a she — lights a number of candles, turns off the bathroom light, and, glass of wine in hand, settles in the tub for a luxurious bath by candlelight.

This sets up sort of a romantic atmosphere that is often used for amorous scenes between lovers, or as a way to show a character finally getting a chance to be pampered for once. If all goes right expect the characters to emerge far more relaxed and sane for the experience.

Unfortunately, this being fiction, it tends to get interrupted, either for comedy, or for more sinister motives. If the sensual atmosphere, all goes really south, this can end up in either a rather embarrassing interruption, or even a Deadly Bath.