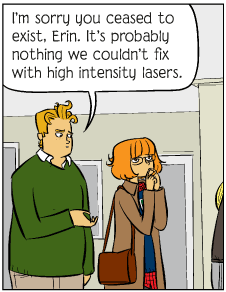 John Allison's mind is a world where statements like this are common and often justified.
Advertisement:

A shared page for various linked webcomics (some of them also print comics) written by John Allison; many are set in or associated with the fictional Yorkshire town of Tackleford, while later stories move to other locations.

These include at least three major runs of comics, and a number of one-offs. These differ mainly in tone and chronology, and characters from one series will often pop up in others, sometimes as major or at least recurring figures. The terminology for describing the various strips can get confusing because of all the shifts, name changes, and changes-of-mind on the author's part regarding the direction they are going. Bobbins is both the original strip and various later revivals, some of them retconned into the early strips and some taking place much later. Scary Go Round is both the successor strip to Bobbins and the title of the current website where various other comics in the Bobbinsverse are published. Bad Machinery is the successor strip to that and is no longer publishing new stories, but its characters continue to appear in other strips, and books collecting the earlier stories are still coming out, with some new material.

The main Scary Go Round site has been down since 2020. Scary Go Round, Bobbins NOW and several side projects are available as PDF books from Allison's Gumroad page

. However, Allison had a tendency up to then to put online archives up, pull them down, shift around their urls, and otherwise manipulate them, so they may still be online somewhere even when old links to them have linkrotted. (The appearance of bobbins.horse

in 2016 is one of the later developments.) The book versions often have additional pages that never appeared online, however.

that explains something of the tangled history of both his comics and the overall plot, and there is a wiki devoted to this fictional universe

Shorter stories and one-offs include:

The Bobbinsverse has a Character Page, currently under construction. Feel free to contribute.

Tropes used in Scary Go Round, Bad Machinery and Giant Days should go on their respective pages. Tropes for other works are listed below.

A Closed Circle murder mystery featuring Lottie from Bad Machinery and Shelley from Scary Go Round. Shelley, now a children's author, is invited to a party in her agent's remote Welsh mansion, and brings Lottie along as her intern. When one of the authors is murdered and several of the guests have motives, our heroines investigate.

Another Shelley stand-alone adventure. This time she's in America (sans intern) doing a book tour. She arrives in Heaven, Arizona just in time for the town’s Lemon Festival, and an attack by a flock of giant vampire moths.

Taking place in 1996, when Shelley, Ryan and Tim still were teenagers and attending school.

A story following the Queen of Hell as she finds her second in command, a dragon dubbed "The Sheriff" Murdered

A series that is mostly unconnected from the other stories until the appearance of, first, a handful of rather marginal-looking strips featuring Desmond, and later a full crossover featuring Lottie and Shelley. Bilinda Baxter is assigned to be the new curate in Tredregyn, Cornwall, and finds it to be a town full of Satanists and under constant assault by demonic sea monsters.