Ó, guð vors lands! Ó, land vors guð!
So "Cold" from all the "Ice"
— Iceland's heading from The Onion's Our Dumb World
Advertisement:

It's an island. With less ice than you would expect.

Iceland (Icelandic: Ísland) is a Northern European country and island in the Arctic and North Atlantic Oceans. It's notable for having a population more or less on par with a mid-sized European… city (330 000 inhabitants), the smallest of all the Nordic countries. Situated on the Mid-Atlantic Ridge, a geological faultline, Iceland has a lot of volcanoes and new islands pop up from time to time (e.g. see the isle of Surtsey

, a classic study in ecology). On account of its placement on the Ridge, it is therefore technically both in Europe and North America (or rather the Eurasian and North American geological plates), with the capital Reykjavik being on the North American side. One particular volcano, Eyjafjallajökull, erupted in the summer of 2010, causing a massive ash cloud that essentially closed most of Europe's airspace.

It and Norway were the most developed nations in the world in 2007. Despite not having an army, Iceland is a member of NATO, but not of The European Union (it has EFTA membership, the next closest thing). Iceland is also a member of the Schengen Area

which in practice means that if you fly from - say - Spain to Iceland you'll have to pass thru customs but not immigration.

Medieval Iceland was renowned for its storytelling culture, and most of the famous Norse sagas (including the Eddas, our best source of Norse Mythology) were written there in the forms we know them today. For that reason (along with the remarkable linguistic conservatism of Icelandic) most recitations of text from the Eddas use modern Icelandic pronunciation rather than reconstructed Old Norse pronunciation as we can be 100% certain what modern Icelandic sounds like (so no squabbling over minor details) and it is a bit easier to learn. Jackson Crawford (of Youtube fame) notably uses reconstructed Old Norse pronunciation, which he usually informs his audience of whenever he recites Old Norse texts.

First settled in 874note By the ancestors of the current population, anyway - there are hints that Scots-Irish monks known in Icelandic Sagas as Papar

may have lived there semi-permanently, but they obviously left no descendants, Iceland ended up as part of Norway in the mid 13th century, then went to Denmark in the 16th century (after the dissolution of the Kalmar Union). Iceland is the home of the world's oldest parliament, the Althing, founded in 930 A.D.

When Denmark fell to the Germans in 1940, the island was cut off and decided to act independently. The British invaded, believing that they would stop the Germans going after it (they weren't planning to do so). The Icelandic government protested, but resigned themselves to cooperating after the British promised compensation and a withdrawal after the war. As British forces were needed elsewhere, occupation was handed over to the United States. There were more U.S. forces (40,000) than adult male locals, and many of the former married the local women.

Iceland was of vital strategic and economic importance to NATO. A stopping point for shorter-ranged aircraft travelling the Atlantic (it is also a divert point for transatlantic flights), Iceland lacked the capacity to defend itself—the British invasion had been done with fewer than 1,000 men. If the Warsaw Pact took over the place, it would provide them with Tu-22M "Backfire" coverage of a good part of the North Atlantic, causing major problems for convoys bringing supplies and troops across the Atlantic.

The United States set up a Naval Air Station at Keflavík Airport, which was a base for U.S. interceptors, like the F-15. The civilian terminal was in the middle of the airbase, meaning that travellers had to go through military checkpoints, until the terminal was re-sited in 1987. This base stayed open until 2006. Keflavík is now a solely civilian-run airport, but military flights do use it. The other NATO air forces now provide air defence on Iceland on a rotational basis. The airport can take the Space Shuttle.

Iceland is by far the largest nation on Earth which has no standing army (the next ones being Panama and Costa Rica). However, it has some special police forces and a capable coast guard with a small air unit that can act as an impromptu defence force. Other than that, most of the defence in a time of crisis would be up to Norway and other NATO countries. During a short period of the 19th century, there was also a small Icelandic garrison of the Danish royal army.

The majority of the electricity in Iceland is generated through Hydro Power, with the rest being geothermal. Iceland is a one of the leading nations in the usage of renewable power and plans to completely phase out carbon fuels by 2050. Or so the politicos claim...

Got into a few disagreements with the UK in 1958, 1972-1973 and 1975-1976 about exactly where its territorial waters were - this was important, as said waters are rich in cod. The UK claimed that the waters were international, so they could fish there. Iceland said they couldn't, because it was their territorial waters. The Royal Navy was sent in to protect the British trawlers and the whole fracas was dignified with the name "The Cod Wars". One shot - possibly a blank - was fired during the three Cod Wars. Of course Iceland won... by threatening to close the NATO base at Keflavík unless the British backed down.

Also, Reykjavík's where Reagan and Gorbachev met in October 1986 to continue ultimately failed discussions (although it did cement Reagan and Gorbachev's nascent friendship) about scaling down their European missile arsenals. You might get extra points on your Cold War quizzes if you mention that.

Suffered a large scale banking collapse and a drop in the value of its currency in 2008. This led to an odd situation where money and junk earned in EVE Online was worth more than their real currency (CCP Games is based in Iceland and the game's currency has the same code, ISK, as Iceland's krónur). The collapse was sufficiently bad that Iceland applied to the IMF for currency stabilization (something that rich countries haven't done on a large scale in quite some time) and applied to the EU for membership (before, Icelanders hadn't decided they needed it). However, the EU membership bid seems doomed since only one party supports it (and not whole-heartedly at that) and also because the question will have to be decided in a referendum, and polls show that as of now, about 70% of the population is against it. It doesn't help that Icelanders were left pretty cold by what happened to some countries that received the EU's "help", like Greece. The banking collapse affected the UK, where a lot of councils had banked with Icelandic banks.

In 2013, Sigmundur Davíð Gunnlaugsson was elected prime minister on the promise that he would crack down on Iceland's foreign creditors. Three years later, the leaked "Panama Papers" revealed that Sigmundur's wife possessed millions in an offshore bank account, money which was housed by the same shell corporation which was a creditor for the collapsed Icelandic banks. In other words, Sigmundur's wife was one of the very creditors he promised to go after. Sigmundur resigned soon after the leaks. Elections were held in October 2016. His then fellow party member, Sigurður Ingi Jóhannsson bridged the gap as PM 2016-2017 and Bjarni Benediktsson (minister of finance since 2013) became PM in January 2017. That government burst in late 2017, there was yet another election in October 2017 and Katrín Jakobsdóttir became PM. The next elections are to be held in autumn 2021.

Also notable is the language. North Germanic languages are already known for their conservative tendencies among the Germanic languages, but Icelandic takes it Up to Eleven by practically being a carbon-copy of Old Norse, the language of the Vikings when they first settled the island in the 9th century, making it a real-life example of an Eternal English (or should we say, Eternal Norse?). Icelanders can simply read the works of Snorri Sturluson (helps that he's also an Icelandic Viking) without any prior learning of Old Norse at all; though the works might feel a bit archaic at times, it's still perfectly understandable for them than it is to, say, the Danes. Icelandic orthography also preserves many archaic letters that have been long lost in other modern Germanic languages, like the Þ (basically what would happen if th is a single letter). Faroese, the language of Iceland's closest neighbor, the Faroe Islands, is closely related to Icelandic and also famously conservative.

When looking at this list, note that Iceland is one of the few cultures today to still use a strict Patronymic (or Matronymic) naming system rather than using family names. This sometimes causes problems for Icelandic families travelling internationally, where children who have a different second name to any adult travelling with them tend to flag up abduction alerts. 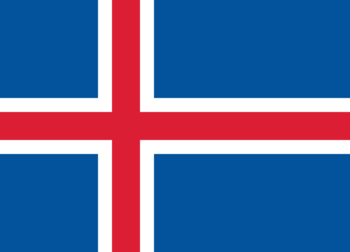 Like all other Nordic countries, the flag reuses the Dannebrog flag of Denmark, while adding unique touches. Blue, white and red symbolize the mountains, ice caps and volcanoes, respectively. Not to be confused with the flag of Norway, in which red and blue are reversed.
Coat of arms of Iceland 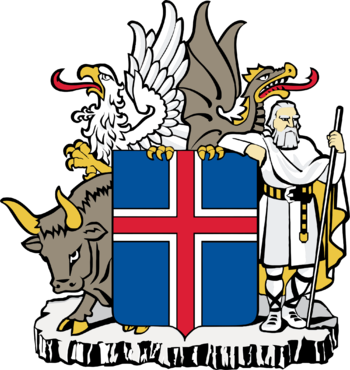