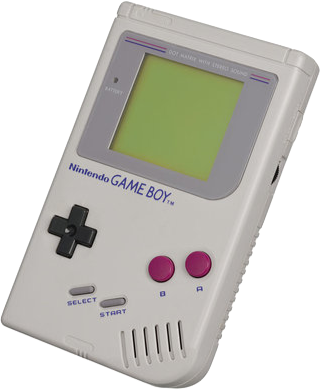 The green screen of life.
The Power is in Your Hands!!
— Marketing tagline
Advertisement:

Up until the late 1980s, handheld gaming was very primitive, in terms of both processing power and the capabilities of small display devices. Portable gaming devices were only capable of utilizing LCD screens that had all possible graphical elements pre-drawn, and gameplay would be achieved by controlling which elements were visible to simulate graphics; basically a video game form of Limited Animation. This had been going on successfully for years with Tiger Electronics' handheld games and Nintendo's Game & Watch series.

Technology eventually progressed to the point where Nintendo was able to combine the portability of the Game & Watch with the flexibility and power of the NES. Thus, the Game Boy made its debut in Japan on April 21, 1989.

Gunpei Yokoi, who previously developed the Game & Watch, decided that this new device would work best if it was small and light (to enhance portability), durable (since it would be carried around a lot), inexpensive (since portable electronic devices tend to be cheaper, save for laptops), and energy-efficient. Brand recognition and launch titles were also important, as the Neo Geo Pocket, WonderSwan and Playstation Vita later demonstrated through their defeats. The Game Boy came bundled with the red-hot Tetris and launched alongside Super Mario Land, which spawned two sequels (Six Golden Coins and Wario Land) that introduced the Super Mario Bros. series' anti-hero Wario. This was later followed by Metroid II: Return of Samus, the second (and canonical) game in the series, which cemented Metroid as a cross-platform franchise. Two years later, The Legend of Zelda: Link's Awakening came out, which itself is a direct sequel to A Link to the Past for the SNES. The game started as kind of a joke project made on the side, and it has some major issues with glitches, but it ended up having almost as big an impact as A Link to the Past; having a portable Zelda on your side was a big deal in those days. Kirby — and Masahiro Sakurai's career — also made his debut on the Game Boy with Kirby's Dream Land. The system would end its lifespan on a high note, as the release of Pokémon Red and Blue gave it an unexpectedly gargantuan second wind in its twilight years that set the stage for the Game Boy Color.

Yokoi succeeded on all fronts, and any handheld which didn't follow the Game Boy's paradigm didn't make it very far. Sega's colorized Game Gear consumed six AA batteries to the Game Boy's four and lasted less than 4 hours, compelling Sega to sell battery pack add-ons to prolong its life. Atari's also colorized Lynx sucked as many batteries dry, was more cumbersome (but somehow more fragile) than the GB, and its best games tended to be NES ports; the majority of its library were turkeys. Nintendo themselves (briefly) forgot those lessons when they rolled out the nigh-unplayable Virtual Boy, which didn't quite capture the public's imagination the same way the Game Boy did, to put it kindly.

The system was/is often mocked for its muddy, four-shade greenscale screen and lack of backlight, not just by competitors but even within the company. (According to legend, during its development the Game Boy was internally derided at Nintendo as the "DameGame," which translates to "lame game.") Nevertheless, the system lasted nearly a decade uncontested before the introduction of its direct successor, the Game Boy Color, and nearly a decade and a half before its eventual discontinuation in 2003, proving that high processing power is not vital to sell a system (successes and takeaways that would be repeated with Nintendo's later handhelds as well as the Wii and Nintendo Switch).

Another unusual approach by Nintendo, ironically for its kid-friendly image at the time, was that it actively marketed the Game Boy toward adults, instead of exclusively towards kids like with the NES. The system also had a nearly 50% female playerbase, which was quite impressive when the SNES only had 29%. Video games at the time were generally considered to be for kids, specifically young boys, while grown-ups who were interested preferred to play games on home computers. These shifts were in large part due to the existence of the Game Boy port of Tetris, which appealed to a very broad audience and not just Nintendo's core userbase of prepubescent males.

There were many peripherals released for it, some of them third-party, some not. (See "Add-ons" below.) The more popular ones tended to add a flashlight so you could play in the dark. Perhaps the most notorious was InterAct's Handy Boy, which was not handy in the slightest: it transformed the svelte system into an unwieldy monstrosity of side speakers, a magnifying glass, and joystick. (At least one kid in every school had one, and they can be readily found at garage sales.) Konami's Hyperboy was a far more elegant take on the same concept.

1994's Super Game Boy was a snap-on cartridge for the SNES which allowed you to play Game Boy titles on the big screen, along with aesthetic touches like adding a border around the screen or changing the color palette. 1995's "Play It Loud" campaign rolled out a series of brightly-colored GBs to replace the ashen gray one. Thanks to advances in technology, the system did have a Product Facelift in the late nineties: the Game Boy Pocket was about half the size of the original, featured a vastly improved LCD screen that was true grayscale, and used two AAA batteries instead of four AAs, all of which aided in it helping boost sales for a few more years. (Indeed, it was the Pocket which carried the original Pokémon games to worldwide domination.) The Pocket was also Yokoi's parting gift to the company, as he resigned from Nintendo in 1996 following the commercial failure of the Virtual Boy; he stayed at Nintendo longer than he planned and created the redesign as a last hurrah specifically so people wouldn't believe he was fired over that device's failure. At the very end of the system's life, Nintendo of Japan released the Game Boy Light, a version of the Game Boy Pocket which included a backlit screen (which ate up battery life considerably faster when it was switched on). This version was only out for about six months before it was discontinued in favor of the Game Boy Color. The GBL was not released elsewhere in the world.

Gulf War. You can witness this Game Boy in person at the Nintendo New York store.