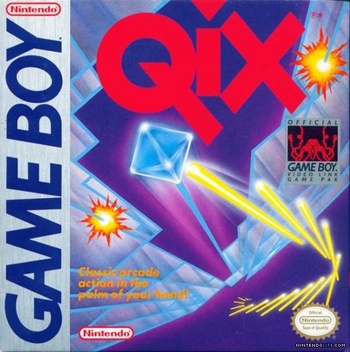 Qix (1981) was a Golden Age videogame involving, of all things, drawing. Draw boxes using "stix" to claim as much screen as possible without getting in the path of the "Qix" (pronounced either "kicks" or "quicks" depending on where you live), "Sparx" or "Fuse". Dividing the play-field fills the area without a Qix, claiming it for the player. Draw slower for more points and hope that you have enough coins. If a Qix touches one of the player's stix while in the process of drawing, a life is lost. Claim enough of the playfield, and the player wins and moves on to the next level. Later levels have two Qixs to deal with. If the player successfully draws a stix between them, the level is cleared automatically, and while you get no bonus points for it, the Score Multiplier is incremented by one. Simple but very addicting!

One of the few games designed by Taito America.

Several softcore Japanese games use the gameplay of this game. So did Cacoma Knight in Bizyland, which attempted to provide a context for the gameplay and created a Widget Game in the process.

Qix received a sequel in 1987 called Super Qix, with improved graphics and a fairy tale fantasy theme. Instead of an abstract stick-like enemy, the Qix appears as a goblin-like creature, while the Sparx appear as sinister red skulls. Volfied (alternately known as Ultimate Qix or Qix Neo), released in 1989note  and also made by Taito, is a similar game with a Darker and Edgier science fiction theme, and incorporates power ups into the gameplay. The original game was also adapted by Nintendo into an early Game Boy title featuring cameo appearances by Mario. The latest game in the series, Qix++, was released for Xbox Live Arcade in 2009, and later as a Japan-exclusive port for the Playstation Portable.