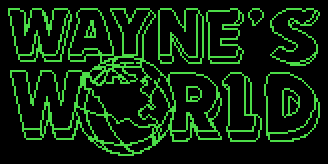 Wayne's World is a Licensed Game based on the film developed by Radical Entertainment and published by THQ that was released for the Nintendo Entertainment System and Game Boy in 1993. It follows the plot of the movie. You control Garth, who can shoot enemies with his gun, or Wayne, who can kick enemies. You have to get to the end of the level within a time limit. There are cutscenes featuring photographs of the two protagonists between each level talking to each other.