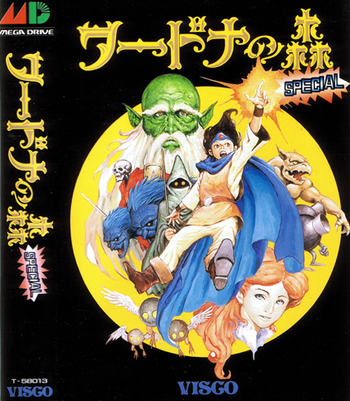 Wardner (Japanese title: Wardner no Moritranslation Forest of Wardner) is a horror-themed Platform Game developed by Toaplan and distributed by Taito. Originally a 1987 Arcade Game, it was ported to the Famicom in 1988 and to the Sega Genesis in 1990.
Advertisement:

Ports of the arcade and FDS versions are available as a DLC add-on in the Compilation Rerelease Toaplan Arcade Garage: Hishou Same! Same! Same! (which also includes Sky Shark and Fire Shark), which was released in Japan on April 28, 2022 for PlayStation 4note For the physical version, you need to redeem a code for the DLC and Nintendo Switchnote The physical version has all content available with no further action needed.