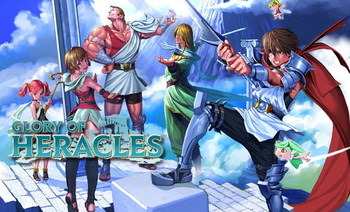 Glory of Heracles (ヘラクレスの栄光) is a five-part JRPG series that was developed by Data East until it folded in the early 2000s, then the license was picked up by Nintendo and developed by a second-party developer, Paon (who is composed largely of ex-Data East employees and bought the IP rights).

The first two games in the series, available on the Famicom are pretty much just straight-up Dragon Quest clones, although the complete and total focus on Greek Mythology (right down to using the proper Greek name of Greek mythology's legendary hero) was and is unique for the genre. The latest title, released for the Nintendo DS, includes light strategy elements, making the game feel similar to Golden Sun.

Tropes used in the series: