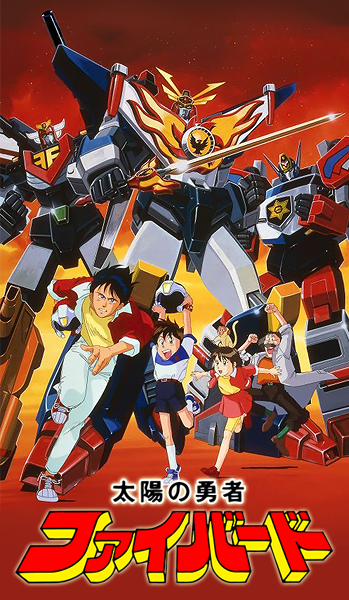 Is this Exkaiser?note Actually, it's the successor show...
Advertisement:

Brave of the Sun: Fighbird was the second Brave Series, which aired from 1991 to 1992 in Japan. The series centered around the adventures of Yutaro Katori, an android possessed by an energy-based lifeform from space, and his fellow Space Police officers, in their fight against the evil being known as Draias.

Unlike the previous Brave series, Brave Exkaiser, which featured the hero as an energy being which inhabited a car, Fighbird focused more on self-parodying humor by having the robot leader take possession of a humanoid-simulating android instead (which interfaces with the Fire Jet to form the robot Fighbird). This forces him to coexist with humanity on their terms, causing a great deal of trouble as he attempts to adapt to human life. The concept of the "Space Police Force" otherwise remains intact (though not connected to the earlier series), a key difference being that the mecha that Fighbird and one of the combiner teams use was developed previously by a human scientist, whose grandson accompanies the Space Police in their battles.

Is this the examples line?:

Is this a Wikipedia article?