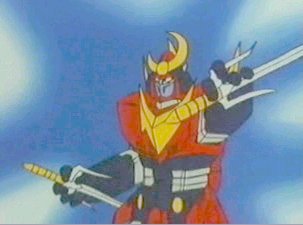 Zambot 3, or more fully, Invincible Super Man Zambot 3, is a 1977-1978 anime series by long-standing mecha anime studio Sunrise and Yoshiyuki Tomino. It was Sunrise's first completely in-house production. Despite consisting of pretty standard Super Robot fare, Zambot 3 stands out for three things, with the first two coming out of the third. Firstly, it had somewhat of a Downer Ending. Secondly, it featured child abuse on an unprecedented level for a children's show. And thirdly, it was one of the earliest (if not the earliest,) attempts at a Deconstruction of the Super Robot genre. The general story is that Earth is being invaded by aliens known as the Gaizok, which are chasing after the survivors of another planet they ruined, who came to live and hide on earth. However, these refugees left behind two weapons - King Beal and Zambot 3, for their descendants to use. Cue Monster of the Week format.

Still, the show stands out because it isn't just 'Monster of the Week.' As our lead hero Kappei Jin and his allies fight the Gaizok, countless homes and towns are demolished in the process, and whereas some later series such as, say, Megas XLR would just play it all for laughs, Zambot plays it all completely straight, in which the people they're trying to protect see them as just as much as a threat to them as the Gaizok and despise them.note In other anime like this, either the heroes would find a way to fight in a place without causing collateral damage; or the people were as forgiving, citing that the towns can be rebuilt. In here? The Gaizok were relentless, the Zambot sometimes had to fight in the vicinity of the innocents without any other choice, and the people weren't as forgiving when the heroes wrecked their homes.. The results would have been a turning point for the Humongous Mecha Genre had it caught on, with greater maturity and sophistication in the storytelling and a much darker atmosphere. But alas, this wasn't to be, and it wouldn't be until a couple of years later when Mobile Suit Gundam was broadcast and the Real Robot genre was invented that the next big advance in the Humongous Mecha genre would occur. (And both shows were directed by the same guy no less!)

Although the show has gained a well-deserved reputation as a game-changer in the robot anime genre, it, like its successor Gundam, wasn't particularly popular at the time and has achieved that distinction retroactively. In addition, the show's dark themes hindered international distribution: to date, the series' only official release in the West has been in Italy, where the show aired in 1981, a year after Gundam (and even then, being shown only on a series of regional channels, never nationwide). However, the series is available for viewing online with English subtitles.