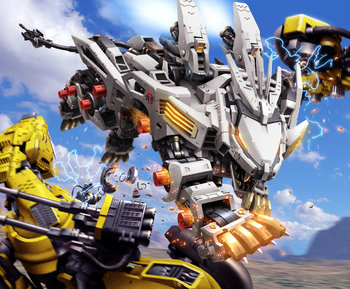 Genesis was believed to have been a Franchise Killer; however, the fifth series, Zoids: Wild, was announced to the complete surprise of the fandom 12 years later. It follows Arashi, a young wannabe Zoid Rider who tames the rare wild Zoid Liger, who previously escaped from the world conquering Death Metal Empire. Together, they fight against the Empire's forces to keep the rest of Planet Zi from being overrun.

Shortly after the conclusion of Wild, Zoids Wild ZERO was released. It follows Leo Conrad and Buzz Cunninghame, who run into a girl named Sally as she searches for her missing grandfather, a researcher who helped terraform the world of Zoids two generations ago. Another researcher is also looking for her grandfather, with vaguely sinister intent.