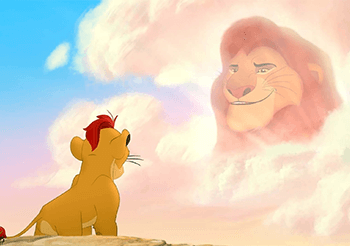 "STOP VAGUELY WATERMARKING THE SKY WITH YOUR SMUG DOUCHEY FACE THIS INSTANT AND FIGHT ME LIKE A MAN!!!"
— John Egbert, Homestuck
Advertisement:

Basically this is when a character's face is shown in the sky. This could be used in different ways. When a missed character is remembered, other characters might see their face in the sky.

This is not to be confused with The Face of the Sun or The Man in the Moon, when the sun or moon are anthropomorphized respectively. Anthropomorphized clouds don't count either.

Related to Died Happily Ever After, which is used when the clouds are used to represent dead characters and reassure their loved ones that despite being murdered by the villain, they are doing perfectly fine in Fluffy Cloud Heaven. Died Happily Ever After is more a related and overlapping trope than a subtrope, as it's not always the character's face on the sky that indicates a happy afterlife.

See also Floating Head Syndrome, Flying Face and Stars Are Souls. If the face happens to be a constellation, it may be an example of Stellification.