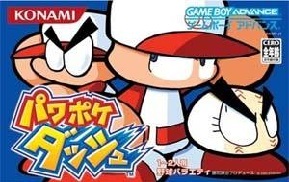 The One With… a poltergeist ball dad. And incest themes.
Advertisement:

Pawapoke Dash is a 2006 dating sim + card game + roguelike RPG developed by Pawapuro Productions, formerly Diamond Head, and published by Konami for the Game Boy Advance. It is a spinoff released after Pawapoke 8 for the Nintendo DS, but story-wise it is connected to all previous installments and is regularly referenced afterwards. The game does not feature a Baseball simulator or any real life teams, and instead introduces the Card Baseball system.

In it, the pitcher and the batter pick cards worth certain fractions of the strike zone. If they match, the batter makes contact and the result is then decided via a roulette. If the cards don't match, it is a strike out for the pitcher. This system was made an optional mode the player could choose for the Outer Successes from Pawapoke 9 to 12. The RPG mode featured in this game is also unique for introducing roguelike systems into the series.

Incidentally, the 2005 DS game Pawapoke Koshien was disregarded as a proper Pawapoke game due to its lack of a story mode tied to the setting, because that is the entire point of the series compared to the Negative Continuity of the main Pawapuro games.

The game was featured as a pre-order DLC for Power Pro-kun Pocket R remake of the series' first two entries in 2021.

A young "Hero Dash" and his father are watching uncle Suguru Mizuki playing for the Moglars when suddenly a home run hit from him slams Hero Dash's father in the head, instantly killing him. The boy has a vision of the Baseball God, who lets the father live on as the baseball that struck him and challenges the boy to become the best elementary school Baseball player in 5 years if he wants his father to become human again.

Despite the game being produced after 8, this story is set between 7 and 8.

While Hero Dash is visiting his father's grave the ground collapses under him and he falls into the underworld. Can he find a way out?
Advertisement: