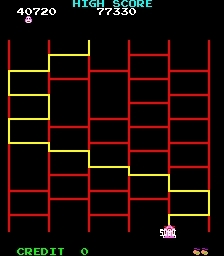 Known in Japan as 'Amidakuji' and in Korea as 'Sadalitagi', Ghost Leg

is a lottery game used in a similar fashion to Drawing Straws. In a ghost leg lottery, one of several vertical lines is assigned to or chosen by each participant, and horizontal lines, "legs", are randomly connected between each vertical line. Or the ghost leg diagram is already drawn, but the portion with the legs is covered so participants cannot see them, and they choose vertical lines arbitrarily. Once each participant is assigned to a starting point, they must follow a descending (or ascending, if the starting point is selected at the bottom) path where a turn is taken at every leg until they reach a point at the other end.

The Ghost Leg is often used to distribute things among people, since unlike random chance games such as Rock–Paper–Scissors, the format ensures each person will be matched to one item at the other side of the board. Any arbitrary number of things will always have a corresponding thing at the opposite end.

In some Video Games, the Ghost Leg is random, playing out like the lottery: the player can only select one starting point, and only one of the paths is revealed to be the correct one while all others lead to a dead end or some other punishment. Other times, the Ghost Leg is a puzzle: the entire board is shown, and the player must choose a winning path or take actions based on the movement of an entity on the board. This is sometimes used as a boss or enemy mechanic, especially with bug themed enemies.

Has nothing to do with Fog Feet or any of the other ghost tropes.