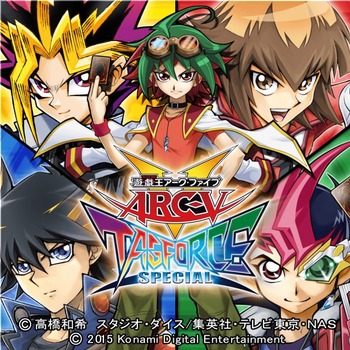 The first four games were based on the storyline of Yu-Gi-Oh! GX, while the following three after Tag Force 3 were based on Yu-Gi-Oh! 5Ds. ZEXAL itself also has a Nintendo 3DS spin-off game, World Duel Carnival, that's similar to the Tag Force series. The latest and seventh entry combines series from all five continuities of the original Yu-Gi-Oh!, GX, 5D's, ZEXAL, and ARC-V. Tag Force Special breaks the tradition by revisiting past worlds and combining every single extra deck mechanic from Fusions to Pendulums. Also unlike the other games, it removes all dating sim aspects and focuses mostly on dueling.

In each of the Tag Force games, you play as the Featureless Protagonist roaming the game's world, which consists of locales from the anime in which they're based from (Duel Academy from GX; Neo Domino City from 5D's, Heartland from Zexal, and Miaimi City in ARC-V) and dueling various characters that inhabit them, both canon characters from the anime series as well as characters made especially for the game. True to their title, you can partner up with these characters (one at a time) in order to engage in 2-on-2 Tag Duels.