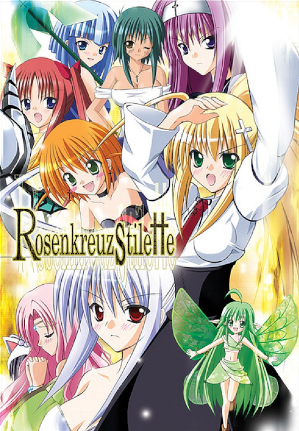 "Der Vorhang ist aufgegangen, wer weiß, was noch passieren wird."* The curtain has risen; who can say what has yet to unfold?
Advertisement:

But tensions between humans and Magi still remained. In time, history repeats itself, as the Commander of RKS, Count Michael Zeppelin, orders a strike against the Empire, fearing that the persecution of Magi is beginning again. Spiritia Rosenberg, a member of RKS who was away when the order was issued, returns home with her fairy friend Lilli to the Imperial Training Hall and meets up with Iris, the Count's daughter. She then witnesses Iris being kidnapped by the dragon Talos and sees the Black Forest burned down, and is shocked when her closest friend and fellow Magus, Freudia Neuwahl, told her that Micheal ordered both acts. Spiritia, aided by Lilli, takes it upon herself to quell the rebellion alone, rescue Iris, and restore peace.

. Both Rosenkreuzstilette and its sequel were also re-released at the Japanese and English PLAYISM store, however, since the site's closure, they are no longer available.

The first game was released in English through Steam on February 3, 2017, with Freudenstachel being released on October 17. The localization project was headed by WOMI himself who was also working along with Darksquid Media (formerly Darkside Translations), the group who was behind the fan translation of the first game. Not much of the games has changed other than a few minor graphical changes, improved controller support, and Steam achievements. You can check out the developer diary of the games' localization process here