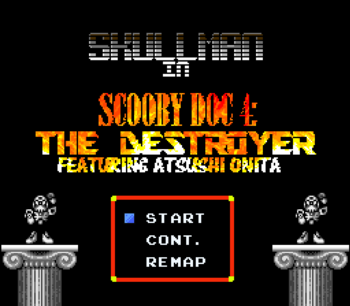 Skullman In: Scooby Doc 4: The Destroyer (Featuring Atsushi Onita) is a fangame by RED-FIRE (the creator of Grand Dad Reboot) and Majestic Sales Inc, loosely based off the Mega Man (Classic) series.

The game is technically a sequel to Skullman Kills, RED-FIRE's previous game to star Skullman, who, in this game, has become an "international attacker" through his many violent missions. One day, a "WARGATE" opens, creating a portal to other worlds and creating mass panic for humans and robots alike. Now, it's up to Skullman to enter the wargate, take on a myriad of unusual opponents, and escape the Void.

Scooby Doc 4, much like it's predecessor, is a Boss Game, with only four of its 20 levels featuring anything more than a beginning room and a boss fight. Defeating a boss rewards Skullman with currency, which he can use to purchase additional weapons or cosmetic hats. The game is filled with strange references; you could be using the Contra spread gun to battle the Black Mage one moment, and be an airplane shooting down Mr. Big the next.

The game was released on November 15, 2018, and is available for download on Game Jolt.