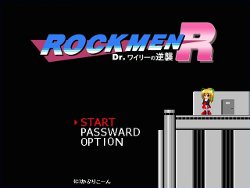 Rockmen R: Dr. Wily's Counterattack (ロックメン R: Dr.ワイリーの逆襲) is a Japanese doujin game for Windows PC done in 16-bit graphics and released by Capricorn on January of 2009. It is a fangame based on Mega Man (a.k.a. Rockman in Japan) that stars Rock's sister, Roll, and features a unique cast of Robot Masters as well as a new Robot Master named Piano.

The developers unfortunately met with a cease-and-desist by Capcom, thus making it virtually impossible to buy the game anywhere, but eventually the game managed to get enough coverage and spread across the internet.

Capricorn later went on to make another Mega Man-styled game on May of 2013 called Touhou Rock Maiden, a Touhou Project fangame staring Reimu Hakurei. Despite having dealt with the cease-and-desist by Capcom and the original game being taken down, Capcricorn went on to develop a sequel, Rockmen R2: Dr. Wily's Return (ROCKMEN R2 Dr.ワ○リーの再起!!), which was released in late 2018 during Winter Comiket 95 and digitally via the Japanese